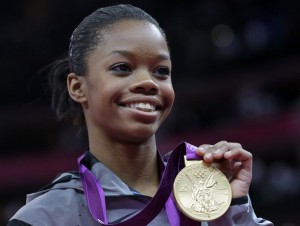 The summer Olympics began in 1896 in Athens, Greece, as a vehicle for bringing together mainly amateur athletes from around the world who qualified to compete in various sports. Excluding the cancellation of these games in 1916, 1940 and 1944 due to two World Wars, the summer Olympics have taken place every four years in industrialized cities in North America, Europe and Asia. In 2016, the XXXI Olympics will take place in Rio de Janeiro, Brazil — the first Latin American country to host the games.

The largest delegations of athletes hail from the rich, capitalist countries: the United States, Australia, Germany, France, Canada, Japan, Italy, Russia and Great Britain, which includes athletes from Wales, Ireland and Scotland. Although China does not fit in the same category, it has more athletes than some of these capitalist countries due to having the wo

rld’s second-largest economy. Countries in Africa, Caribbean, the Middle East, the South Pacific islands and other parts of Asia have much smaller delegations — some that can be counted on one hand.

The global reach of the Olympics is phenomenal due to the technological revolution in communications. These advancements have made it possible for more people than ever to view the 32 sports by either TV or the Internet. An estimated 1 billion people watched some portion of the opening Olympics ceremony on July 27, which is comparable to the Super Bowl.

The International Olympic Committee is the public face of the Olympics. Currently there are 105 members of the IOC, including only 20 women. Less than half the members are former athletes. The IOC oversees and funds the day-to-day work of the national Olympic committees in various countries. 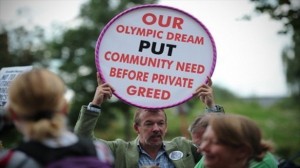 Protesters in London near Olympic stadium.

One of the main tasks of the IOC is to choose which cities will host the Olympics. Each choice is based on economic and political considerations. For instance, behind the decision for Rio de Janeiro to host the next Olympics is the fact that Brazil has the world’s sixth-largest economy, overtaking Great Britain, and the largest population in Latin America of people of African descent, second only to Africa.

Powerful forces behind the Olympics

The IOC’s income generates hundreds of millions of dollars due to corporate sponsorships, especially the selling of broadcast rights. In 2003, the National Broadcasting Corporation and all of its TV and internet affiliates bought exclusive viewing rights to the 2010 winter Olympics in Vancouver and the London Olympics for more than $2 billion. Once this deal was completed, the IOC relinquished its right to any viewing control of the games. These rights mean that NBC determines when, what and how each sport can be viewed.

This impacts not only the U.S., but also other countries which cannot afford to broadcast the games. The internet is one of the main sources of watching live competitions, especially for the most popular sports like gymnastics and swimming.

This monopoly has created a firestorm of protest via social media, especially when NBC banned any live viewing of the opening ceremony. Viewers were forced to watch a taped delay of the ceremony in primetime, which included a multitude of commercials and biased, U.S.-centric commentary from the likes of Bob Costas. Disparaging remarks were made by Costas against countries like the Democratic People’s Republic of Korea, Iran and Uganda. When the ceremony was repeated in the early morning of July 28, some portions were censored, including the Palestinian athletes carrying their flag during the parade of nations.

NBC, owned by General Electric, receives much of its revenue for airing the Olympics from other corporations which want their ads seen by hundreds of millions of viewers. The Olympics are a source of lucrative profits for Coca-Cola, Cadillac, Acer, Dow, McDonald’s, Samsung, Panasonic, Visa and many more.

These same corporations search for athletes to sponsor, based on who makes the greatest social impact. For instance, after Gabby Douglas became the first African-American woman gymnast to win gold in the all-around competition, she immediately became the number-one focus of discussion on Twitter, rather than swimmer Michael Phelps.

This was not lost on Kellogg’s, which immediately offered Douglas a $9 million to $10 million contract to put her face on the front of their cereal boxes to generate sales. Douglas’s mother is a single parent who declared bankruptcy to help finance her daughter’s training, which kept her away from home for more than two years.

The hypocrisy of the corporations is that if they truly cared about Gabby Douglas, other athletes of color and working-class athletes in general — instead of big profits — they would donate billions of dollars to building recreational and training facilities in urban and rural areas and make them accessible to all youth, similar to what China has done.

Maybe that’s why China won more gold medals than the U.S. the first week of the games and is leading by one as of Aug. 6.