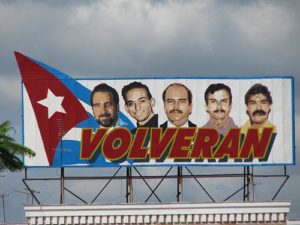 They will return:
a billboard in Cuba honors the Cuban Five.

Teachers, students with jobless futures and indentured to enormous loan debt, and public workers from the U.S. will travel to Tijuana, Mexico, for the Aug. 17 through 19 Ninth U.S./Cuba/Mexico/Latin America Labor Conference. The conference will be preceded by a 3-day seminar from Aug. 15 through 17 led by instructors from the Cuban Workers Central Union’s Lázaro Peña Workers School. The Aug. 17 evening program will uplift the struggle to free the Cuban 5 — Gerardo Hernández Nordelo, Ramón Labañino Salazar, René González Sehwerert, Antonio Guerrero Rodríguez and Fernando González Llort — unjustly imprisoned in the U.S. since 1998.

Rosa Aurora Freijanes, spouse of Fernando González, will represent the family members of the Cuban 5 and participate throughout the conference. Cristina Vázquez, laundry worker leader and Workers United, Western States Regional Joint Board, SEIU international vice president, will share the successful work in bringing the case of the Cuban 5 to the U.S. labor movement.

In addition to three representatives of the Cuban Central Workers Union, international participants will include Mexican electrical workers and teachers — frontline fighters against privatization and destruction of their unions and their recent stolen election — and representatives from Brazil, Ecuador, Venezuela and Puerto Rico.

The agenda will include two plenary sessions with floor discussion. As a new feature this year to increase the opportunities for discussion and interaction, two sets of the two Saturday afternoon workshops are planned.

Particularly in this period, when the global capitalist crisis is threatening to devour all social benefits and rights of the working class, the message and experiences from Latin America can help clarify the relationship between social movements and organized workers. Both the classes and the conference are an opportunity to learn about the Encuentro Sindical Nuestra América movement, designed to forge working-class unity, and the Bolivarian Alliance for the Peoples of Our Americas (ALBA), which has introduced equitable trade without U.S. dollar domination and the basics of social justice, including universal education and health care for the people of member countries.

Fernando González Llort, René González Sehwerert and Gerardo Hernández Nordelo all served as international combatants during the war for liberation against racism and apartheid in southern Africa. For more information about the Cuban 5, including the link to a new YouTube video featuring Danny Glover and Peter Coyote dramatizing actual testimony from the trial of the Cuban 5, go to theCuban5.org.

Pre-registration is encouraged. Online payment, instructions and information are at LaborExchange.blogspot.com. Participants are encouraged to make hotel reservations at the Hotel Palacio Azteca using the inclusive Cuba Labor Conference rate, which includes breakfast and dinner at the conference. Information about special hotel and registration rates for students and young workers is available from [email protected] or call 313-355-8566.