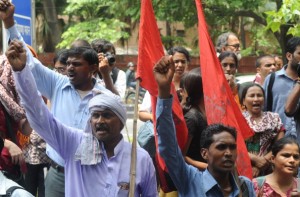 It should be remembered that auto mogul Henry Ford employed 3,000 gangsters at his Rouge plant outside Detroit to try to stop workers from joining the United Auto Workers. But company violence couldn’t stop the union drive at Ford, and it won’t stop the workers in India.

The rebellion was sparked by a supervisor who abused and insulted a Dalit worker — whose caste used to be known as “the untouchables” — and then the worker protested. Instead of taking any action against the supervisor and without any investigation, company managers suspended the worker.

The Maruti Suzuki Workers Union issued a statement on July 19 in which its president, Ram Meher, asserted that when workers and union representatives were negotiating with management about this suspension, the company called in “hundreds of bouncers on its payroll to attack the workers. … The gates were closed by the security on behest of the management and the bouncers brutally attacked the workers with sharp weapons and arms.” (NDTV.com)

The union official explained further: “They [the bouncers], joined by some of the managerial staff and police later, beat up a number of workers, who have had to be hospitalised with serious injuries. The bouncers … also destroyed company property and set fire to a portion of the factory. The gates were later opened to oust the workers and enforce a lockout by the company.”

Instead of rounding up the bouncers, India’s capitalist government arrested 91 workers on July 18 for their alleged involvement in the events that day. Among them was Yogesh Kumar, the local union’s organizing secretary. Police are hunting down all 3,000 workers in its “murder investigation,” blaming them for the death of the “human relations” boss who died in the fire that was set by the company thugs.

The company has now declared a lockout of the workers at the Manesar plant.

The labor movement in the U.S. must protest this anti-union witch hunt, and show solidarity with fellow union members in India.

Conditions in the Manesar plant are intolerable. A car rolls off the assembly line every 38 seconds. That’s 94 cars per hour. Arriving a second late to punch in means a worker gets a pay cut. Returning even a minute late from the two allowed breaks results in losing a half-day’s pay.

These workers have fought hard for a union. They had to go on three strikes last year, lasting a total of 64 days, just to get union recognition.

This superexploitation resulted in Maruti Suzuki getting $60,000 in profit off each of its workers. This outfit makes 45 percent of India’s cars and is majority owned by Suzuki Motor Corporation of Japan. Most of the rest is owned by Indian financial institutions.

However, it isn’t just Japanese and Indian capital that are exploiting these workers. Germany’s Volkswagen owns 20 percent of Suzuki, a stake that used to be owned by General Motors.

The struggle at the Maruti Suzuki plant “has sent shock waves through corporate boardrooms … at home and abroad,” said R. V. Kanoria, president of the Federation of Indian Chambers of Commerce and Industry. (Financial Times, July 22)

Moreover, it must be resonating through India’s 1.2 billion people, over one-sixth of humanity.