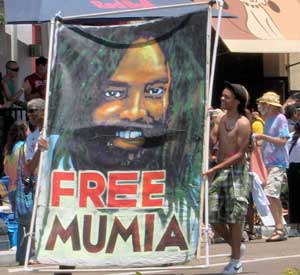 The underlying meaning of the Lesbian, Gay, Bisexual, Trans and Queer Pride marches held each year in the United States and across the globe is to honor the Stonewall warriors of 1969 and celebrate the gains that have been won in the years following their heroic stand against state repression. The turnout for the San Diego Pride parade in mid-July has been huge for many years. It is San Diego’s biggest yearly civic event. Viewed by curbside crowds estimated at several hundred thousand, this year’s progressive contingent in the march included members of the San Diego Free Mumia Coalition, which carried a large canvas painting of Mumia Abu-Jamal done by well-known San Diego artist and muralist Mario Torero. Although Mumia is now off death row, this internationally known political prisoner and visionary, revolutionary writer remains unjustly confined in the U.S. concentration camp system, a targeted victim of state repression. In San Diego and around the world, the message continues to be “Free Mumia now!”