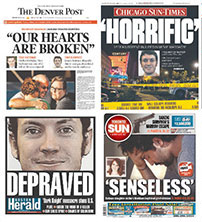 The most important question raised by the latest massacre in Colorado remains unasked by the corporate media: What is it about social conditions in the United States that promotes these terrible tragedies?

Late on the evening of July 19, theatergoers in Aurora, Colo., sat down to watch an “event” film — the kind whose opening at midnight showings is preceded by saturation ads placed by Hollywood studios.

“The Dark Knight Rises” is the final in a film series based on Batman comic books. The protagonist is a billionaire vigilante whose primary objective is to “clean” the streets of a metropolitan area of criminals, who for the most part commit crimes of opportunity. On occasion, he tangles with oddly named and outfitted master criminals with murky rationales.

Twenty minutes into the film, survivors said a young man outfitted in full-body tactical gear — including a helmet with gasmask, vest, leggings, throat and groin protectors — threw gas canisters and began shooting into the crowd. Aurora police say he fled out a back door, but was quickly captured in the parking lot. They have identified the alleged shooter as James Holmes, 24.

In the initial confusion Holmes was thought to be a prop associated with the screening. But the screams of those shot soon alerted others to what was happening. In all, 70 people were reportedly shot; 12 were killed, the youngest a six-year-old girl. A dozen of the wounded remain in critical condition.

Holmes made his first appearance in court on July 23; formal charges will be filed on July 30.

Survivors told of great acts of heroism. Family members, friends and complete strangers shielded and ushered one another out of the theater, while Holmes shot at random, first with an AR-15 assault rifle, which is a shortened version of an M-16, and then with a 12-gauge shotgun and two Glock 40-caliber semi-automatic pistols. He is reported to have purchased them over a period of several months in preparation for the massacre.

Why isn’t Holmes called a terrorist?

Holmes grew up in an upper-middle-class area of San Diego, Calif., raised by a computer scientist/mathematician father and a mother who is a nurse. According to police, he had booby trapped his apartment in Aurora and left his door unlocked. If tripped, the intricate traps could have killed many in the building and the nearby Anschutz Medical Campus of the University of Colorado.

The media have been cautious not to use the word “terrorist” because “there is not enough information as to motive.” Would they be so reserved if the suspect were a Muslim from almost anywhere?

What if Holmes were a person of color? Mightn’t labels like thug, gang member or terrorist have been hastily applied, regardless of how much information police had? In the wake of Hurricane Katrina, people scrambling to survive were labeled criminals and looters. The media constantly reported false stories of rape and mass murder, eager to believe the worst when describing Black people.

If Holmes had an Islamic name, or one uniquely African or Southeast Asian, would he have been able to purchase and stockpile massive amounts of ammo, four weapons including an assault rifle, tactical gear, accelerants and large commercial fireworks? If he had a known affiliation with a progressive or leftist group that was infiltrated or spied on by authorities, might not his apartment have been flagged and raided?

Whatever personal motive the shooter might have had is speculation at this time. However, the massacre of people in a movie theater is an act of terror, and the few words he allegedly uttered claiming to be the Joker character in “Batman” showed he was very aware of this.

Holmes may suffer from delusions that come from a mental illness. But his planning, purchasing of weapons, tactical body armor, thousands of rounds of ammunition and chemicals, and other components to make bombs and the other devices found in his apartment show a great deal of calculation. However, mental illness and the ability to think through a plan are not mutually exclusive.

Nevertheless, the label of mentally ill, or sometimes genius, superb student, etc., are the usual platitudes whenever a “normal” or “everyday” person who is not from an oppressed community commits a crime such as this massacre.

This event must be analyzed in the context of the overarching culture of war and violence that runs through the entire history of the United States and has been perpetrated against the most oppressed and vulnerable. Violence is an integral part of this capitalist system, based on exploitation of workers and super-exploitation of the nationally oppressed.

The established norm, what is generally accepted as everyday or mundane, flows from how the wealth of this society was first gained and then maintained. The dominant class in U.S. society has historically been white. Thus, Holmes is “normal” at first glance and without a coherent political motive, so the word terrorist is not applied to him.

Instead, he is categorized as a loner, a misfit or socially awkward, which denote that in no way is this type of violent crime condoned or reinforced by the society as a whole. At the same time those terms disregard the glorification of violence in the U.S. and the effects of the military-industrial complex on the culture.

Karl Marx wrote that under capitalism workers must sell their labor power for a wage as part of a productive process owned by a boss, leaving the worker alienated from the product. There is no satisfaction in the end product because the primary reason to work is to earn a wage to sustain oneself and one’s dependents.

Over time workers are not only alienated from what they produce, but are in competition with one another for jobs — which are now becoming increasingly scarce. This often influences how people relate to one another and contributes to the development of some mental illnesses and anxieties. The more developed the country, especially one that has passed into the imperialist phase, the more decadent the society grows and with it the prevalence of social illness.

It was just a few miles from Aurora that a similar incident happened in 1999 at Columbine High School. There two teenagers specifically paid reverence to Hitler’s birthday and espoused ultra-right, racist beliefs as they gunned down fellow students.

A culture of war & militarism

Most of Colorado was stolen from Mexico in an extremely violent war. It is a militarized state where Rocky Flats, the infamous U.S. government facility, produced chemical and nuclear weapons for 40 years. It also once housed napalm-maker Dow Chemical.

Colorado is home to defense contractors Lockheed Martin and several Northrop Grumman facilities, the North American Aerospace Defense Command, the Air Force Academy, and one of the largest and most technologically advanced infantry divisions, the 4th Infantry based at Fort Carson.

Before becoming a state, it was the site of the 1864 Sand Creek Massacre, where hundreds of Cheyenne and Arapahoe were massacred by the Colorado Territory militia, which terrorized Indigenous people into leaving their land.

It is also where the National Guard and company goons employed by the Rockefeller-owned Colorado Fuel & Iron Co. massacred two dozen striking miners and their family members in Ludlow in 1914.

San Diego, Calif., where Holmes grew up, is a military area with a huge Naval base close to the border with Mexico.

To leave out the effect on people’s minds of the military-industrial complex and the U.S. history of conquest would miss the point. The U.S. was founded on violence and genocide. The major colonial countries carved up land that did not belong to them. They waged a battle that is still ongoing against the original inhabitants, as well as against Black people and Latinos/as in general and other oppressed peoples who don’t belong to the dominant nationality.

Maintaining the status quo has been a violent affair. The U.S. has been constantly at war since its inception. The mainstream media justify this with jingoism and glorification of the U.S. military machine.

The U.S. military budget dwarfs that of the rest of the world’s combined. The constant glorification of violence in movies, commercials and video games, plus the fact that the U.S. has been openly engaged in warfare for the last decade, seep into the psyche.

U.S. soldiers massacred at least 16 villagers in Afghanistan just months ago, many of them women and children. Such massacres are commonplace during an occupation. Every day whole families are incinerated by bombs.

This is the context in which the mass killing occurred in Colorado, where, as in most of the U.S., it is so easy to purchase weapons, tactical gear, loads of ammunition and other materials online.

No family should have to experience such horror. People should be outraged, and the victims and their family members are entitled to justice. But justice is not served by making this an isolated incident and leaving out its historical, cultural and social framework.

James Holmes may be mentally ill. This should not reflect on those who suffer from mental illness, but who would never harm another person. Nor should it be assumed that mental illness is an excuse to get out of going to prison.

Julie Fry, a Legal Aid attorney in Brooklyn, N.Y., told WW: “Mental illness is not generally well understood or appreciated at all within the criminal justice system. In fact, prisons have become essentially warehouses for people with mental illness, while social services and medical networks designed for the treatment of these illnesses have been gutted systematically through budget cuts over recent decades. Far from using it as an excuse to escape prison, people with mental illness usually receive much worse treatment in jail and are likely to receive longer sentences than other people.”

Only a sick society refuses to give people the help and services they need.

The argument that incidents like this happen because of the prevalence of weapons is problematic. It is obvious that all too often the right-wing do champion gun rights and the wealthy and politically backward have access to large stockpiles.

But revolutionaries and progressives such as the Deacons for Defense and the Black Panther Party were able to offer defense from the Klan and racist police by being able to purchase guns. While people of color are made the targets of the police and denied the right to self-defense, we cannot cede the monopoly of force to the police and the military, which maintain the status quo of a society built on exploitation.

The victims and family members do deserve justice, but ultimately justice will be secured when the root causes of crimes like this one are addressed and the social foundation for the glorification and justification of violence is uprooted.

Hales lived in Aurora and Denver, Colo. He was in the Army’s 82nd Airborne Division.