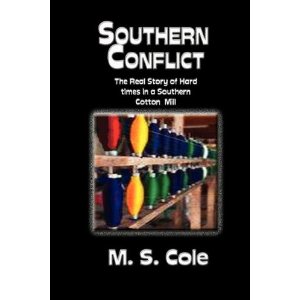 Writers are always told: “Write what you know.” That’s what M. S. Cole did in her novel, “Southern Conflict: The Real Story of Hard Times in a Southern Cotton Mill” (Alabaster Book Publishing, 2011; 371 pages). A 50-year resident of Greensboro, N.C., whose spouse worked in a mill for 40 years, Cole writes with compassion and empathy about the workers’ day-to-day worries and struggles that flow from intimate experience.

Cole’s tale of the Turner family in the mid-1950s captures the hardscrabble life of oppressed mill workers, forced to work for pennies, while the owners look down on the company town from their mansions. Although the bosses nickel and dimed the workers — some, like Aunt Ellie, died on the job — that way of life ended in the 1970s when owners sought bigger profits overseas.

By slowly building the story around the workers’ lives and jobs, Cole skillfully entices readers to care about them. She details strict gender and racial segregation on the job: the men are doffers, the women spinners, with Black workers relegated to menial jobs, though one Black woman integrates the spinners.

The heart of the story is how the workers fight back when the bosses speed up the machines and hike the already backbreaking workload. Almost all the white workers, the only ones allowed in the union, vote to strike. The Black workers play a crucial role by honoring the picket lines. Then the bosses hire scabs (strikebreakers) and call in the cops. One striker is disabled and loses her mind when a scab car speeds through the line. Later, the cops viciously beat a Black leader.

Though the workers lose the strike and are forced to work under inhumane conditions, Cole introduces a surreal twist of fate. When that is combined with sharply declining profits — orders are returned due to shoddy work — the bosses opt to end the speedup. A triumphant turning point occurs when Black and white workers eat side by side at ajoint dinner in the union hall.

With all eyes looking to protests in Charlotte, N.C., during the Democratic National Convention Sept. 1-6, Workers World readers might enjoy learning about a way of life that reveals the historic fighting spirit of the hardworking people who live there.

Madge Cole is a longtime Supporter of Workers World newspaper. Her book may be ordered for $20 from the publisher at Alabaster.biz or from Amazon.com.