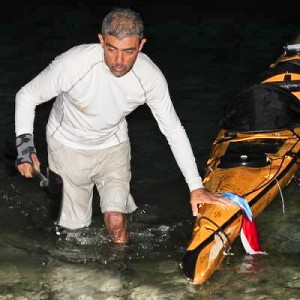 Some might consider traveling solo in a kayak on the turquoise — but sometimes treacherous — waters of the Caribbean Sea during the hurricane season a suicide mission. This, however, is exactly what Puerto Rican daredevil environmental activist Alberto de Jesús, better known as “Tito Kayak,” is doing.

For him and thousands of other Puerto Ricans, this action pales in comparison to a life dedicated to the struggle for independence of that island-nation. The aim of this “Kayaking through the Caribbean,” you see, is to free Puerto Rican political prisoner Oscar López Rivera from the U.S. prison system.

Who is Oscar López?

The now 69-year-old López had come to the United States as a child with his family. Like many youth at the time, he was drafted into the U.S. military during the war against Vietnam. This experience showed him the need to fight for the liberation of his own people and of Puerto Rico from colonial bondage.

After his return to Chicago, where he had moved as a teenager, López worked incessantly toward this goal. He became a community activist, participating in struggles against police brutality, discrimination in the delivery of utility services, housing, etc. He worked to help create educational and cultural programs for youth and prisoners.

In 1981, he was arrested, with 14 other compatriots, accused of belonging to a clandestine movement for Puerto Ricanindependence, the Armed Forces for National Liberation (FALN), and charged with and convicted of “seditious conspiracy”— attempting to overthrow the government of the United States in Puerto Rico by force.

The sentences were long. After pressure from a campaign of supporters, it was only in 1999 that President Bill Clinton granted clemency to 12 of the 15 Puerto Rican political prisoners in U.S. prisons at the time. López was among the 12, but he refused clemency because it was not offered to all.

His imprisonment was the type this imperialist government imposes on all who dare resist — long years in maximum security, isolation, difficulties for family visits, lack of adequate health care, etc.

In March 2011, López wrote an open letter to the Puerto Rican people explaining why he had decided at that time to request parole, which he had refused in the past. Even though López has shown exemplary behavior in prison, so far his parole has been rejected, and he will have to serve an additional 15 years.

This further outrage has angered the solidarity movement, reenergizing it at an international level and prompting newer tactics. One is “Kayaking through the Caribbean to free Oscar López,” Tito Kayak’s initiative.

Kayak is well known for his audacious actions on behalf of the environment, the Puerto Rican anti-colonial struggle and world peace. He co-founded in 1995 the organization “Amigos/as del M.A.R.” (Movimiento Ambiental Revolucionario or Revolutionary Environmental Movement). He was active in the struggle to oust the U.S. Navy from Vieques and for other environmental struggles on the island.

In 2007, Kayak was arrested in Panama for hanging a large sign, on the highest point of the Americas Bridge, protesting the passage of ships with radioactive waste through the Panama Canal and the Caribbean. That same year he was jailed in Israel for hanging a Palestinian flag on top of a tower in the Israeli apartheid wall.

On June 21, he started his kayaking campaign in Venezuela. His goal is to travel 1,400 miles from Venezuela to Puerto Rico and then to Washington, D.C., the final destination, to demand freedom for Oscar López.

Meanwhile, Kayak plans to stop at several islands to raise awareness and bring the struggle for the freedom of López to the international community. As of July 9, his kayak had broken twice, and Kayak had been treated for an injured wrist. At the time of this writing, he is approaching the island of St. Lucia from St. Vincent where he had to stay for several days to repair the kayak.

Though the kayak has been temporarily repaired, it is not expected to last the complete journey. A new kayak must be purchased. Donations can be sent to Banco Popular to the account of Alberto De Jesús #239560382 or through PayPal to the email account of [email protected]

Oscar López, however, is not the only Puerto Rican political prisoner, only the longest held in prison. There are also two brothers, Avelino and Norberto González Claudio. Both have been accused of participating in the 1985 operation to secure $7.12 million from a Wells Fargo armored truck in Hartford, Conn. That operation was carried out by a clandestine organization fighting for the independence of Puerto Rico, the PRTP-Macheteros, (Puerto Rican Workers’ Revolutionary Party). Avelino, the older of the two, was apprehended in Puerto Rico in 2008 and since then held in prison in the U.S.

Norberto was arrested in Cayey, Puerto Rico, on May 10, 2011. He is also in prison in the U.S. Though their sentences are far shorter than López’s, prison conditions have been equally criminal. Both have been denied adequate medical treatment.

In Avelino’s case, after diagnosis of Parkinson’s disease, he was denied necessary treatment, which might cause permanent damage. He might be released earlier, in August 2012 instead of next October, but so far the Federal Bureau of Prisons has made no comment.

Norberto, who has served one of five years, will face sentencing Sept. 27 in Hartford. His support committee is encouraging activists to show solidarity that day in front of the court.